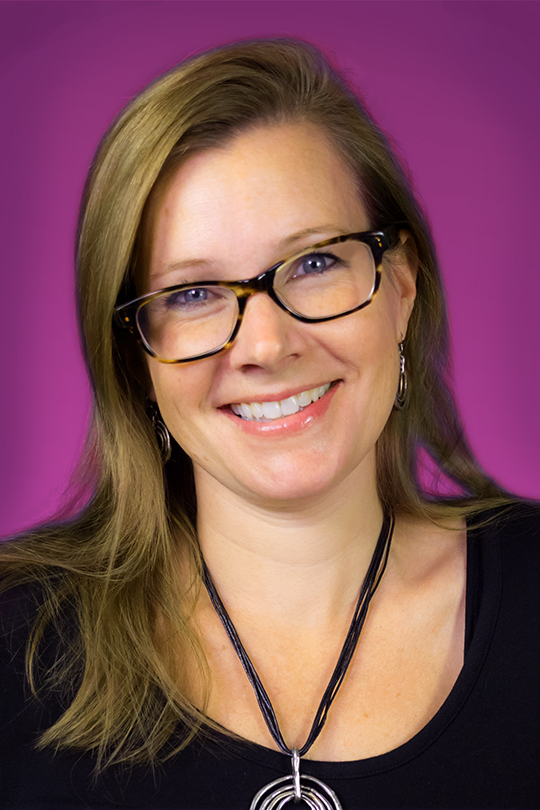 Likes cheese, dangerous sports and the color blue. She hails from Virginia, attended Haverford College in Pennsylvania and the University of Edinburgh in Scotland, none of which explains why she sounds like she was born and raised in the Midwest. Or why she named her cat Dog. Amanda climbed Mts. Rainier, Salcantay, and Kilimanjaro and now is the CEO of Jellyvision, also without benefit of oxygen.

Jellyvision people are some of the most talented, creative people I could ever hope to work and snack with. When I joined in 2000, the company was mostly focused on interactive games and not failing. Today, we’re leaders in decision support technology and we’re not-failing with gusto. The credit for our transformation goes to a world-class team of obsessives, weirdos, geniuses, wizards, and all-around nice people.

Amanda Lannert is the CEO of Jellyvision, maker of benefits engagement platform ALEX. More than 1,500 companies (including 114 of the Fortune 500 and two-fifths of the country’s 25 largest companies) use ALEX to help their employees understand complex topics, from choosing a healthcare insurance plan to using their benefits year around to saving for retirement.

Since taking over Jellyvision’s helm in 2011, Amanda has played a key role in the company’s success: she spearheaded Jellyvision’s pivot from a services agency to a software-as-a-service company, while creating a category and positioning ALEX as it’s clear leader. On top of that, Jellyvision is profitable and hasn’t lost its sense of humor.

Meanwhile, the company has been recognized as the Best Software Company and Best Culture by the Moxies, the Lighthouse winner by the ITA, a top 10 best place to work in Chicago by The Chicago Tribune and the #1 place for millennials to work in Chicago according to Crain’s. Prior to joining The Jellyvision Lab, Amanda managed global brands for Kellogg’s while at Leo Burnett, where she developed strategies and implemented campaigns for Pop-Tarts and Nutri-Grain bars, in addition to spending two years in a new business and new brand development think tank.

Amanda is active in Chicago’s startup community, serving as a board director for SpotHero, Equilibria, Popular Pays, and KnowledgeHound, and as an angel investor and board member of Hyde Park Angels. Amanda also serves as a board member for 1871, a not-for-profit tech accelerator, as a Trustee for the Illinois Institute of Technology, and as a “Super Mentor” for Chicago TechStars, where she was also named Mentor of the Year. Mrs. Lannert attended Haverford College and Edinburgh University. She has climbed Mounts Kilimanjaro, Rainier, and Salcantay, is quick to laugh, and enjoys a good cupcake.